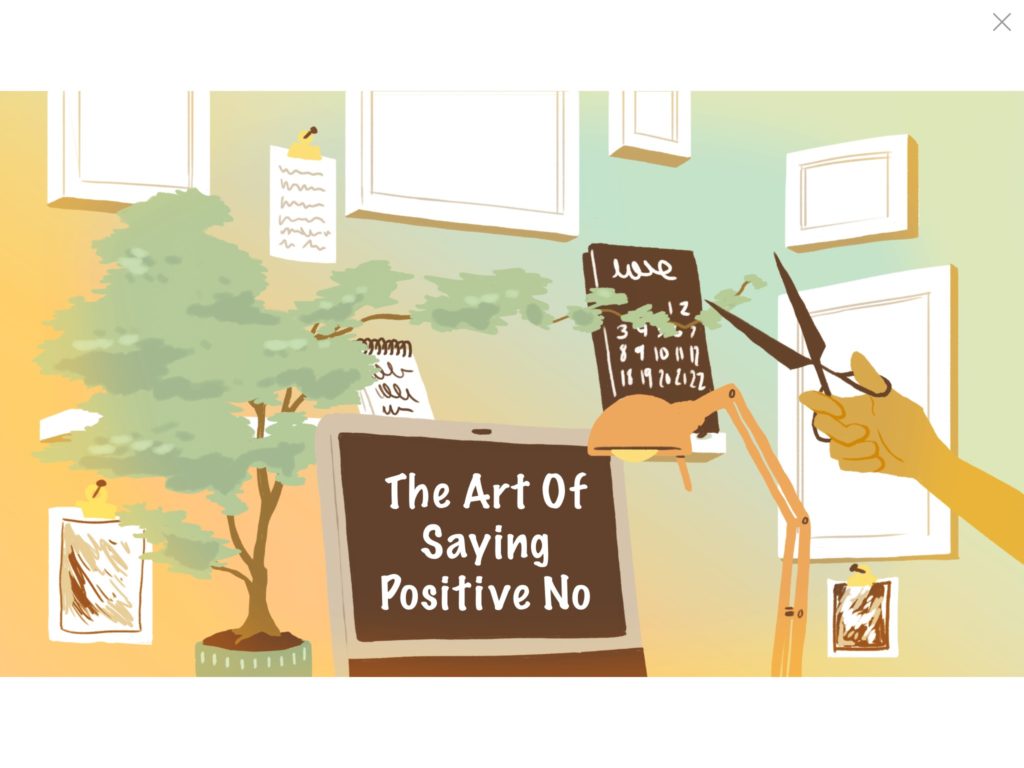 The modern world offers people just about everything they can dream up. Every choice you make, whether it’s picking a career or deciding what you should read next, opens up a never-ending list of options.

While this variety might seem appealing, it can actually be quite stifling.

Real freedom is all about narrowing things down and committing to what you truly want.

However, rejecting the things require taking responsibility for making that choice, and nobody but you can decide what matters to you.

Every time you say yes to one thing, you’re effectively saying no to something else.

So you want your yes to be focused on the things that matter and that you’re uniquely placed to do.

But there’s a common obstacle to focusing our time, which is a desire to avoid difficult conversations with people who are making requests we have to decline. And quite often you might say;

“So I find it hard to say no, and I get tense before making the call or walking into the meeting where I need to do it.”

That’s where the “positive no” technique comes in handy.

If you find it difficult to extricate yourself from low-priority commitments, then learning how to deliver a positive no is like discovering a new superpower—it gives you the ability to make everyone feel better about the choices you’re making (including yourself).

First articulated by William Ury, the co-founder of the Harvard Program on Negotiation, it’s a technique that fits very neatly with the neuroscience of our discover-defend axis.

Remember that our brains are constantly scanning for anything that promises to be a potential threat or reward.

When people are responding to a threat, their brain diverts activity from sophisticated thought to blunt and rapid responses, a lot like if they’d suddenly discovered the building was on fire.

Now think about our usual way of gracefully declining a request.

We start with “I’m really sorry, I’m not going to be able to come to the meeting/take on the project/paint the self-portrait you commissioned . . .” It sounds polite.

But starting with the negative signal of “I’m sorry,” however well meant, puts the other person on high alert.

Their brain immediately goes into defensive mode: “You’re backing out! This is a threat!”

And in this mode, people don’t have the mental capacity to be expansive or generous in their thinking like they do when they’re at their best.

You might have been hoping for the other person’s sympathetic understanding of your priorities, but you’re unlikely to get it while they’re on the defensive.

To give yourself a better chance of engaging with someone whose brain is in discovery mode, you would like to start with something positive, rather than something negative.

You can start with warmth.

First, acknowledge and show appreciation for the person’s request.

Then, instead of starting with “I’m sorry . . . ,” begin by enthusiastically highlighting whatever your positive priority is right now, and why it’s interesting, important, or meaningful to you. Consider picking out a reason that will also resonate with the person you’re talking to.

Explain with regret, that you can’t do the thing they’ve asked you to do.

Perhaps there’s a suggestion or offer you can make without detracting from your real priorities, such as an introduction to other people who could help.

At the very least, offer some warm wishes for success in their project. It’s an important closing sentence that often gets dropped when we’re focused on our own discomfort at saying no.

One of my close friend shared a recent example of a positive no that helped him manage his workload.

One thing that takes time out of his life is long-distance travel; he’s often saying yes to trips that are interesting but not critical.

Recently he agreed to a trip to Tokyo before he realized just how difficult it was going to be to make time for the visit.

He didn’t think he could back out of the trip, but the alternative was worse: doing a mediocre job on projects that were important for the future of his company. Ultimately, he realized that he had to tell the organizer that he was withdrawing, so he could reclaim the time in his schedule.

“I’m so sorry, but unfortunately I’m no longer going to be able to join you on the trip to Tokyo, We’ve recently taken on three big projects and I’m finding myself swamped with all that entails. As a result, I just can’t carve out the time to make it possible, despite my best efforts. Huge apologies again.”

By comparison, his positive no went something like this:

“I was honored that you invited me to Tokyo. The work you’re doing is fascinating and impressive [warmth].

As you might know, our side of the business has also grown enormously in the past few months. We’ve taken on three exciting new projects that will really change the way our clients think about marketing. I’ll be setting up the projects in the coming month, and it’s my responsibility to make them the success they deserve to be [his yes].

To do a good job, though, I’m having to let go of a lot of things. And sadly, one of them is the chance to come to Tokyo. I’m disappointed, as I was looking forward to it [his no].

Please let me know if it would be helpful to connect you with people who might take my place and add value to the group—I have a few ideas. In the meantime, I wish you all the best for a fruitful trip [warmth].”

The two responses feel very different to read, don’t they?

The content of his positive no was essentially the same as his conventional no—a decision, an explanation, and an apology. And as soon as the trip leader started reading the more positive version, it’s likely she guessed the reason for his email.

But there’s no mistaking the fact that the tone of the second email feels quite different from that of the first.

With the positive version, her reward-hungry brain will have been a little buoyed by his upbeat comments about his new projects.

Sure enough, despite her disappointment, my friend ended up winning both her understanding and respect.

And this has generally been his experience.

He used to fear that he’d damage relationships by saying “no thanks,” but it hasn’t happened since he began deploying the positive no.

And he realized that

“it’s far better to convey a clear, sincere message that I’m not in a position to give my all, instead of doing a half-baked job because I’m stretched too thin.”